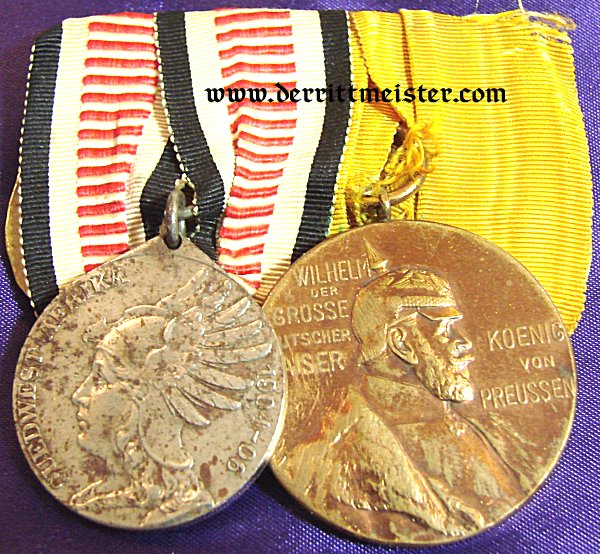 This is a two-place medal bar. It features, from left to right, the:

it is always difficult to find medal bars which have decorations from Germany’s colonies. Whether the medal contains a medal from China or Africa they are VERY difficult to find. Both the medals and the ribbons are in a very pleasing condition. It is a good solid pair.

In 1897 Kaiser Wilhelm II authorized this medal to commemorate the centennial of his grandfather, Kaiser Wilhelm I’s birth. The gold toned-medal measures 1 ½” in diameter. The obverse displays Wilhelm der Große’s high-relief profile. The reverse has information about him, including his birth year and death date. The medal does not have a jump ring or ribbon…

This is a consignment item. The Kaiser Wilhelm I Centennial Medal commemorated the 100th (1797-1897) anniversary of Kaiser Wilhelm I’s birth. It is an interesting variation of the award. To begin, these decorations were awarded with an urkunde (award document). While the decoration is in very good condition, what really sets it off is that the yellow ribbon (customary with this medal) is tied in a bow rather than its normal vertical style. This means that it was intended for a female, which is quite unusual. I am not sure I have ever seen another version like this. 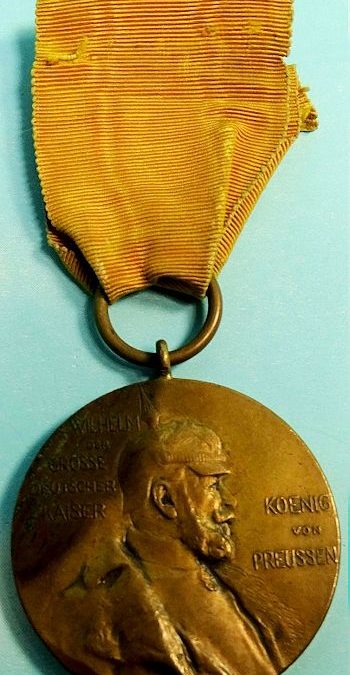 The Kaiser Wilhelm I Centennial Medal commemorated the 100th (1797-1897) anniversary of Kaiser Wilhelm I’s birth. The decoration is in very good condition. An original ribbon accompanies it…. 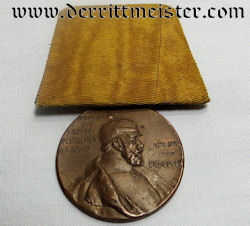 This is a one-place Kaiser Wilhelm I Centennial medal bar. Along with Frederick the Great and Friedrich Wilhelm III, Kaiser Wilhelm I (1797-1888) was a highly successful Prussian King. Prussia grew to be Germany’s dominant state while he was king (with Otto von Bismarck’s direction as his “Iron Chancellor”). Germany eventually was unified under Prussia’s direction, beating Austrian and French armies in short order. He completed his rise to power in 1871 at Versailles, where he was crowned Germany’s Emperor. His reign continued until his death in 1888. He was replaced by his son, former Kronprinz Friedrich III, who lived for only ninety-nine days before dying of throat cancer. Wilhelm I’s grandson, Wilhelm II, then ascended to the throne and ruled until the German Empire’s end in 1918.
In 1897, Wilhelm II authorized this centennial medal in honor of his grandfather’s 100th birthday. The bronze decoration is mounted as a one-place medal bar. The medal displays a deep patina. Its ribbon is soiled.

This is a marvelous three place medal bar for a soldier who saw service in the German colonies. From left to right we see:… 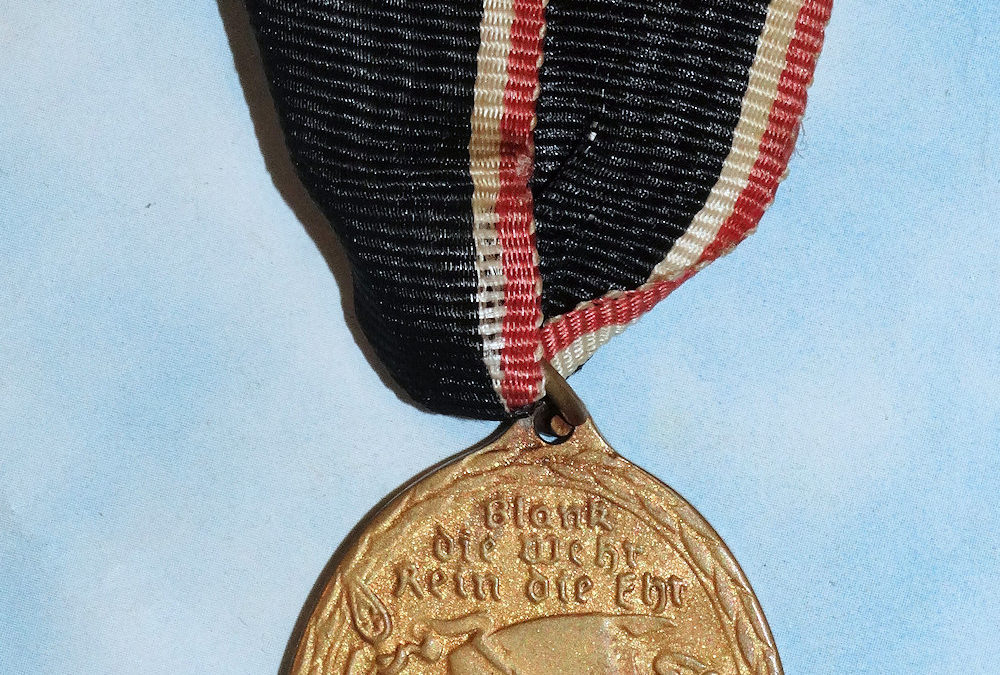 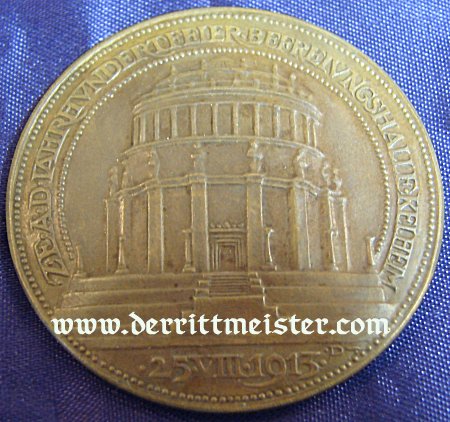 The medal was issued on 25 August 1913, when Kaiser Wilhelm II visited the Befreiungshalle to celebrate the Battle of Leipzig’s Centennial, one of the battles for which the monument was created. The medal’s obverse features a high-relief rendition of the monument. The occasion is noted around the medal’s edge, while the date is listed at the medal’s bottom, “25 VIII 1913.”……

This is a large-format, four-place medal/ribbon bar. It measures 5 ¼” x 1 ½.” Hooks on the reverse allow one to hang the decorations, or it can be used as a ribbon bar without the medals. [PLEASE NOTE. The decorations are NOT included with this bar]. From left to right are the ribbons for the:

The ribbons are exceptionally clean. 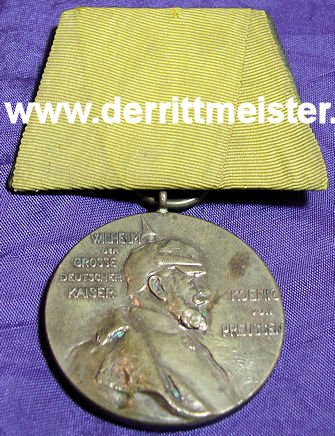 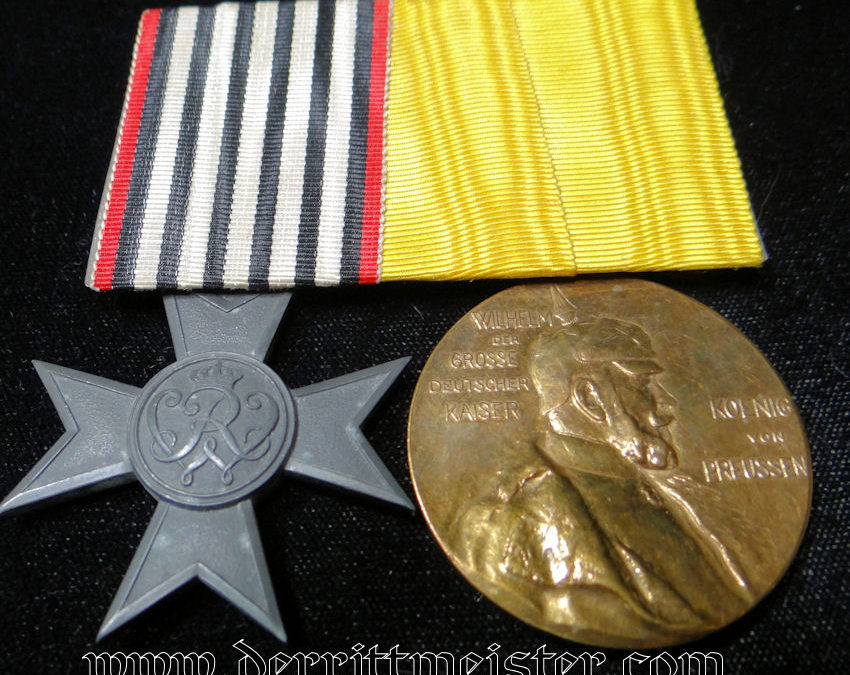 This is a two-place medal bar. Its medals are listed from left to right below.

Kaiser Wilhelm Centennial Medal. The medal was created in 1897 by Kaiser Wilhelm II to honor his grandfather’s (Kaiser Wilhelm I) 100th anniversary of his birth (1797-1897). Germany’s first Kaiser lived from 1797 until 1888.

War Merit Medal. The medal was created during WW I, and awarded to civilians who served Germany on the home front.

Both the medals and their ribbons are in very fine condition. 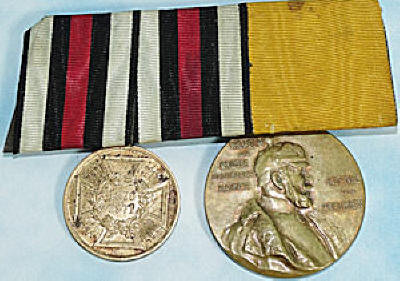 This two-place medal bar features a Franco-Prussian War Combatants Medal on the left. It is one of the decoration’s issued examples. The “issued” badges were cast from melted down French cannons, a fact that is engraved on the decoration’s edge (a practice initiated during the 1813-1815 Napoleonic Wars). On the medal bar’s right is a Kaiser Wilhelm I Centennial Medal commemorating his birthday’s 100th anniversary (1787-1897). The two decorations are mounted on correct ribbons that show some soiling.

This is a delightful, six-place medal bar. It has an unusual combination of decorations that makes it a must-have for any medal bar collection. From left to right, we see the:

*Hindenburg Cross with Swords for Combatants.

All of the decorations are in very fine condition. The ribbons are all clean and quite pleasing. The large medal bar measures 2″ wide. It is an unusual combination for a soldier who served in the military for more than twenty years during the 19th and 20th centuries 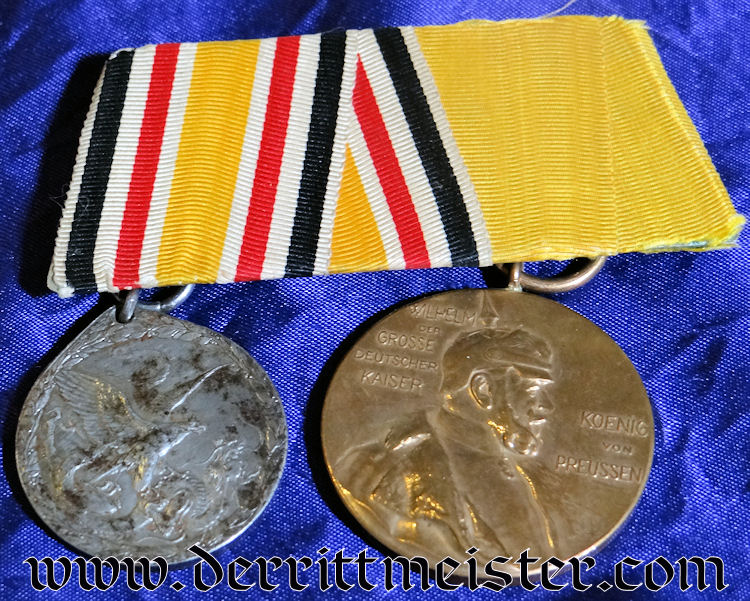 I was quite pleased to acquire this small medal bar. Generally, finding a two-place medal bar is not a great cause for excitement….. 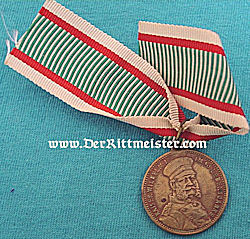 This was a privately produced patriotic medal. A likeness of Kaiser Wilhelm I is on the obverse and a monument is on the reverse. The medal measures 1″ in diameter. It comes with a green, white and red ribbon. 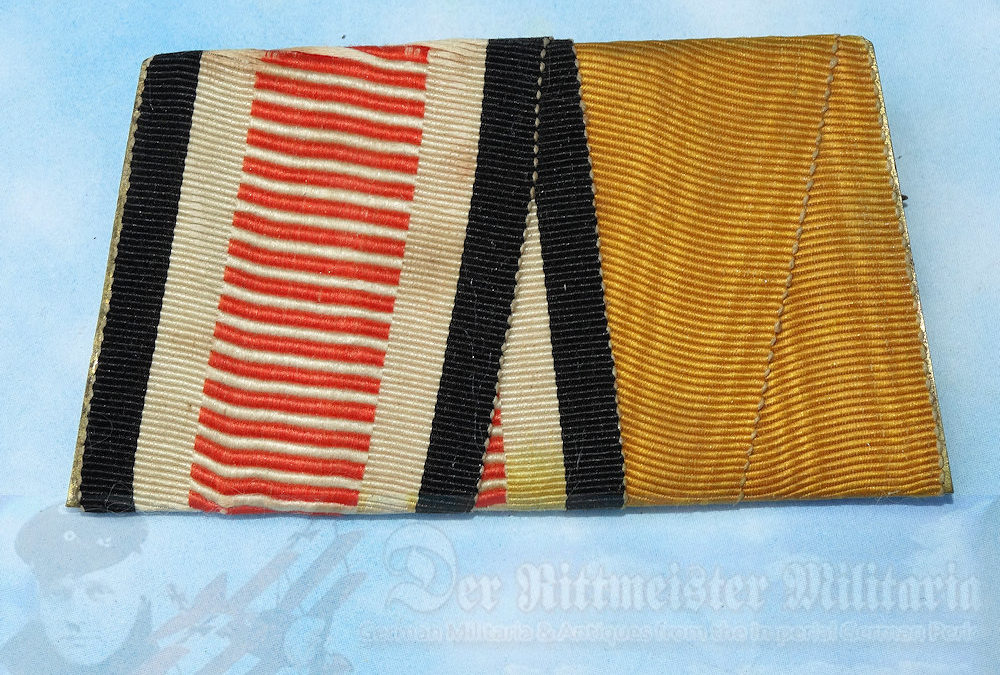 The ribbons displayed are for the Southwest African Campaign Medal and the Kaiser Wilhelm I Centennial Medal. It comes complete with a red backing and a pin with which to attach it to a garment. 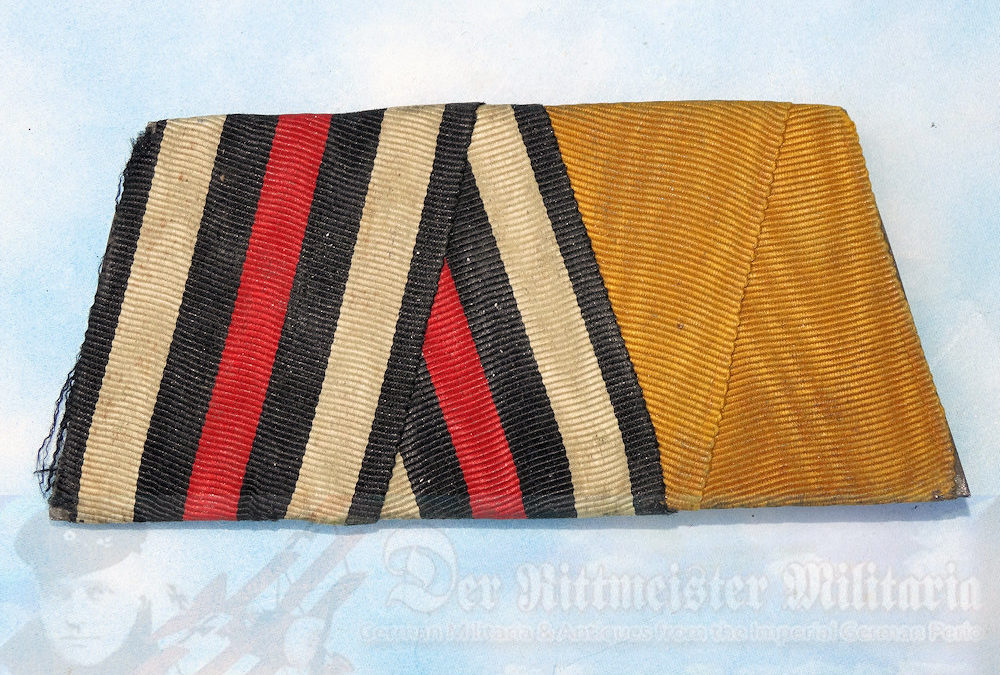 This is a two-place ribbon bar. On the left is the Combatants 1870-1871 Franco-Prussian War ribbon. The right side displays the yellow Kaiser Wilhelm I Centennial Medal ribbon. Both ribbons show substantial staining as the ribbons are more than one-hundred-years-old plus. The bar’s reverse reveals that the pin for securing the ribbon bar to a uniform is missing. The catch, however, is in place. In spite of this fault it remains suitable for display, especially considering its very reasonable price. 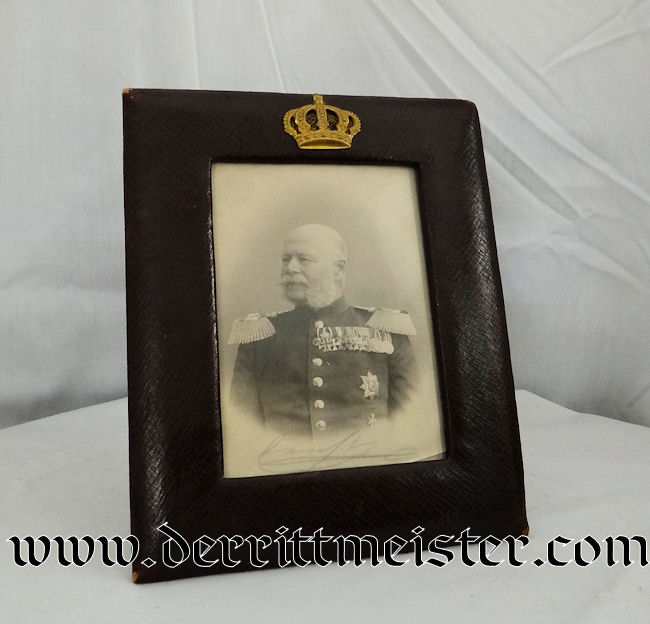 This is a presentation-framed photograph of Herzog (Duke) Ernst I of Saxe-Altenburg. Saxe-Altenburg was one of the small Saxon duchies. It was associated with the Saxe-Ernestine line, which was directly connected with the Kingdom of Saxony’s ruling House of Wettin. Ernst I (1826-1908) served as the Duke of Saxe-Altenburg from 1853 into 1908, after succeeding his father, Georg. Ernst I’s son, Ernst II, followed him, serving as the Duchy’s final Duke from 1908 until the Empire fell in 1918.
The signed portrait of Ernst I comes in an official frame that was given to favored subjects, fellow royals, etc. The photograph depicts Ernst I in a general officer’s uniform. It is very likely that the uniform is for 8. Thüringisches Infanterie-Regiment Nr 153. [As Saxe-Altenburg was a relatively small duchy, it was the only full regiment that Saxe-Altenburg fielded]! He is wearing a very large medal bar that sports an 1870 Iron Cross 2nd Class with Twenty-Five year Oak Leaves and the 1897 Kaiser Wilhelm I Centennial Medal. This dates the photograph from 1897 to 1908. At the photograph’s bottom, we can see Ernst I’s scrawling, black ink signature. The photograph within the frame measures 5 7/8″ x 3 13/16.”
The frame is made of high-quality leather. At its top is a large brass crown that signifies Saxe-Altenburg’s royal crown. The frame measures 8 1/4″ x 6 3/4.” A foldaway easel appears on the reverse that allows the frame to be displayed on a flat surface. At the top is a note from a modern-day German collector containing some of Ernst I’s basic information. The frame shows some wear on the reverse, but it remains a great royalty item for a state from which we seldom see material.

This is a four-place ribbon bar. From left to right we see the:

*Military Service Cross 2nd Class for Combatants – Braunschweig. The ribbon has some staining on it. It could be rust or even blood.

*Hindenburg Cross with Swords for Combatants.

The ribbon bar’s reverse shows that the pin and catch are intact.

This is an officer’s-level seven-place ribbon bar. Included in the ribbons are the 1914 Iron Cross 2nd Class for Non Combatants, Kriegshilfekreuz, Red Eagle Order, Crown Order, Officer’s Long Service Award, Kaiser Wilhelm I Centennial Medal, and a medal from Saxe-Coburg-Gotha. This was most likely a ribbon bar for a doctor. Seldom do we see the Iron Cross 2nd Class with the Non Combatants ribbon.

I have been holding onto this document group for more than three years. I kept it partly because it is extremely interesting. Another reason: it took a long time to familiarize myself adequately with its contents so I could describe it. It concerns a Prussian officer with the unexpected name “Arthur Hay.” Hay went from an Unteroffizier in 1886, to at least the rank of Oberstleutnant in 1917. He started in the cavalry and served in both Ulanen, Husaren and Dragoon regiments prior to the war’s outbreak. He achieved the coveted rank of Rittmeister well before the war began in 1914. As best as I can make out, he went from the cavalry to the infantry [as the war developed, most cavalry fought as dismounted troops. WW I showed once and for all that mounted troops were outmoded]. He served as an infantryman until the end of the war. I do not know his final rank, but he may have gone on to be an oberst, or possibly a general. I will leave this as part of the fun for the eventual buyer researching this man. Hay served at least THIRTY years in uniform. He survived the war and even received the Hindenburg Cross in 1935. No less than SIX Promotion Patents are present, covering him from the ranks of Unteroffizier up to major. Each patent is very ornate and hand printed by a skilled calligrapher, with special seals. Also in this group are many award documents. Of his three wartime decorations, we see the documents for his 1914 Iron Cross 2nd Class and his Knight’s Cross with Swords of the Hohenzollern House Order (HHO). The latter document is signed by the Graf Zeppelin, prior to his death in 1917. I have never seen his signature on an award document; having it on an HHO document is a real plus! There are a couple of other documents that I have not described which enhance the group. Below is a listing of this amazing group’s contents:

Promotion Patent: from Portopee Fähnrich to Second-Lieutenant, dated 17 September 1887. [I find this interesting, note the old-fashioned use of the French rank: “second-lieutenant”].

Promotion Patent: from Second-Lieutenant to Premier-Lieutenant, dated 14 November 1895. I again find it interesting, the old-fashioned use of the French ranks second-lieutenant and premier-lieutenant.

Promotion Patent: from Oberleutnant to Rittmeister, dated 10 September 1908, personally signed by Kaiser Wilhelm II. Why he has a second document for this same rank, I do not fully understand.

Award document for the Knight’s Cross with Swords of the Hohenzollern House Order, dated 20 May 1917 while Hay was an oberstleutnant. It is signed by Graf Zeppelin!

Award document for the Kaiser Wilhelm I Centennial Medal.

Award document for the Hindenburg Cross for Combatants, dated 1935.

[A helpful reader has done some additional research on Arthur Hay. As you can see from the list below, published research shows that our man eventually achieved the rank of Generalmajor at his retirement in 1919. He was born in 1866 and died in 1940. (I only wish that the additional three patents were available). It remains an amazing group with even more opportunities for research. Also, in the book Hussars and Mounted Rifles. . . by D. H. Hagger, page 30 displays a photograph of Oberleutnant Hay when he was a member of Husaren Regiment Nr 9! It is wonderful to put a face with the name. MANY thanks to Chris F. for his research and diligence!

This wonderful group follows the very successful military career of a young man who came up from the ranks. It includes two signatures from Kaiser Wilhelm II, and a signature from the legendary Graf Zeppelin. 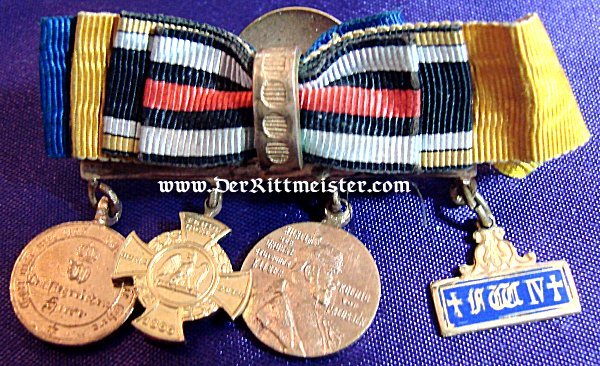 This is a four-place boutonniere.

The medals and ribbons are in excellent condition, however, the Centennial Medal’s ribbon has pulled loose on one side. This is not detrimental to its overall appearance and probably can be repaired without too much trouble…… 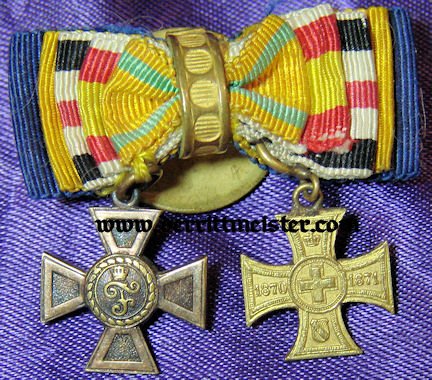